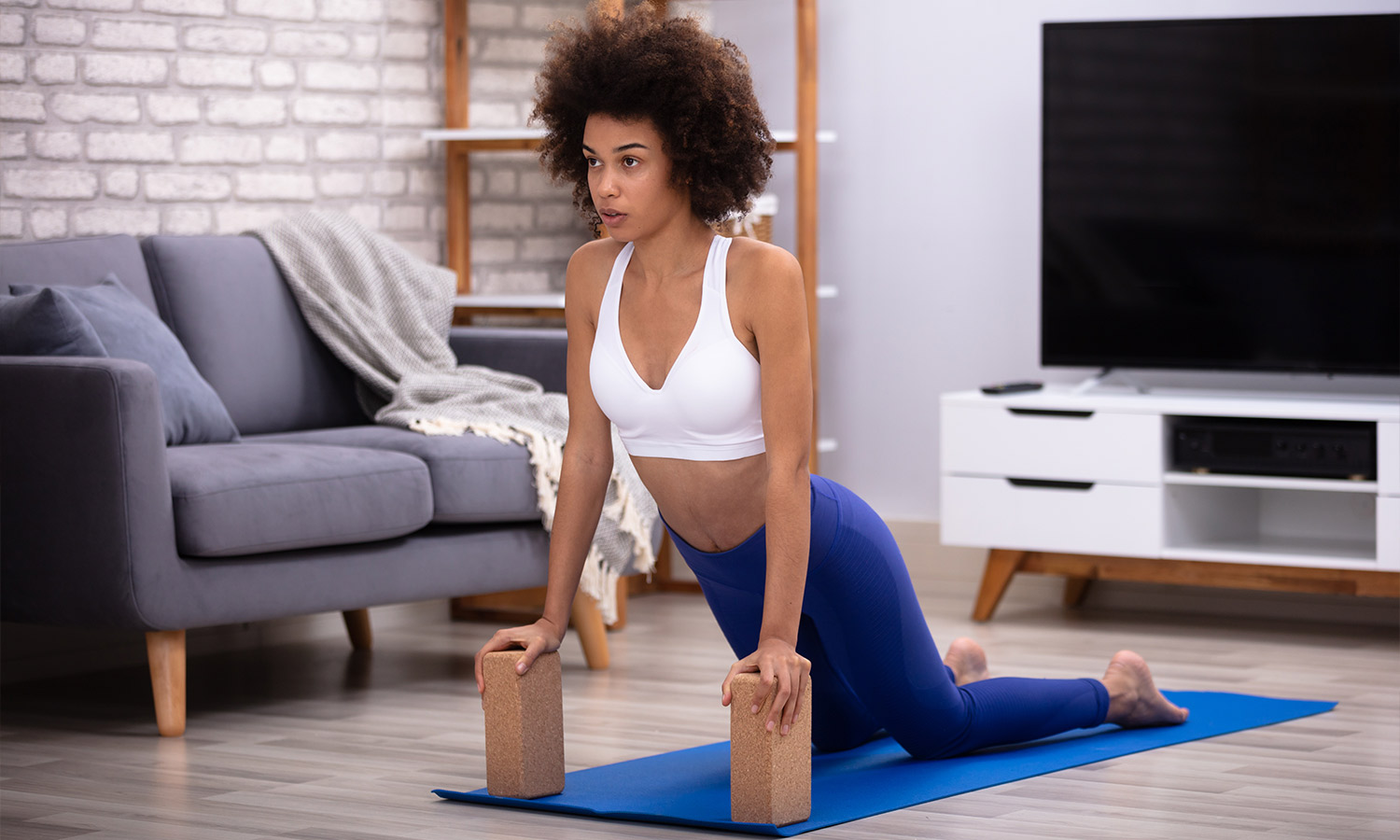 When I first slunk my way into a yoga class over a decade ago, I couldn’t touch my toes. Every part of me was tight, from my hamstrings to my shoulders. My limbs felt like wet noodles.

In time, however, I was able to touch my toes in forward fold. When I lifted my legs into headstand for the very first time, I felt exhilarated. Eventually, I was able to fling myself into a handstand against the wall.

The journey was slow. The progress was incremental. But with steady effort—and with the added intensity of a yoga teacher training program—I became stronger and more flexible.

The mood boost was the cherry on top.

But my forward momentum faltered after I gave birth. I continued my yoga practice throughout my pregnancy, only switching to a prenatal yoga class near the end. But things shifted after I became a mom. My twists were no longer as deep and I often slid out of side crow. I was afraid to lift up into headstand from prasarita padottanasana. Though I was no longer carrying another life inside of me, I felt off-balance.

Several years later, I began to experience pain in my right kneecap when in anjaneyasana (crescent low lunge pose.) I went to physical therapy and, later on, yoga therapy. I learned how to modify certain poses in order to strengthen those muscles that weren’t pulling their weight.

At the age of 41, teaching Zoom yoga from my living room, I have come to grips with the fact that my yoga practice will never be what it was. After all, our bodies are always changing. Now, I approach yoga with the belief that we should adapt the postures to the person… not force our bodies to adapt to the poses.

Whether you’re in a postpartum body, a fat body, an aging body, a disabled body, or some combination thereof, you can always modify your yoga practice to serve you. Here’s how.

At the yoga studio, I’ve noticed students hesitant to use the yoga props we provide, as if using them is to admit to some sort of shortcoming. I am forever telling them that props are their friends. They don’t always believe me.

“Props are guides to self-learning,” wrote yoga guru B.K.S. Iyengar in 70 Glorious Years of Yogacharya. The man behind Iyengar Yoga, he encouraged the use of props so that all people—regardless of medical conditions or chronic pain—could access the practice.

When it comes to yoga props, the possibilities are endless. I often recommend the use of blocks to allow folks to bring the floor closer to them when they’re in various standing poses, such as standing forward fold, extended side angle pose, triangle pose, or lunge. This enables them to keep the spine long versus contorting it to reach a floor that remains out of reach.

They can also use blocks to press deeper into a fold or to press up into a backbend to prop themselves up when in hero pose.

Some of my favorite poses are supported poses that require blocks, such as supported bridge pose, supported fish pose, and supported shoulder stand.

I could go on.

If you’re practicing at home and don’t have blocks handy, you can use your water bottle, books, or boxes—whatever’s lying around that affords you both height and stability.

Then there are straps. I often cue the possible use of straps during hamstring stretches, because they can be looped around the balls of the feet or in shoulder openers for when your shoulders feel tight (mine always do). If you’re at home, you can grab a belt from your bathrobe or something similar.

I recommend blankets and bolsters for propping yourself up in seated folds. They allow the pelvis to tilt forward so that it’s easier to sit up straight. And, my god, it feels so nice to slide a bolster or other pillow beneath the knees during savasana to provide a sense of release to the lower back.

Because of my intermittent knee pain, I’ve lately become a lover of various types of knee pads that you can unfurl across your mat or place directly beneath one knee as a cushion. But you can also make do with pillows and folded-up blankets or even just fold over the edge of your mat.

You can use other things around you, too, like the wall. Walls can help with your balancing poses if you’re feeling wibbly-wobbly. You can do inversions there if you don’t want to go upside down in the center of the room. Walls can also help to facilitate quad stretches, shoulder openers, standing balances like Warrior III… even a modified downward dog.

Finally (in the realm of props), you can use chairs. There’s a reason chair yoga is so popular. While it’s often used by folks whose disability affects their legs. Also, it’s used by other folks who have trouble getting up and down from the ground because of the strain it places on their body. Anyone can use them to work on modified inversions, standing balances, and more.

Basically, if a pose feels inaccessible to you, props can help.

Clearly, the options available when it comes to props could fill an entire book, so I recommend checking out Eyal Shifroni’s Props for Yoga and the rest of his series of prop-focused books.

Modify the Poses in Other Ways

When I visited a yoga therapist for my knee pain, she pointed out that, caught up in my love of hip stretches, I’d been ignoring hip strengtheners.

In anjaneyasana in particular, I let myself sink deeply into my hips, really muscling my way into that delicious hip and quad stretch.

But this is also where I most often experienced my knee pain.

So, she had me take a different approach. Instead of sinking into my hips, I began drawing my thighs toward each other in order to strengthen the muscles in my hips and my thighs, all the way to my knees. I couldn’t get as low into the pose. But this modification helped me strengthen muscles I had previously neglected, and also provided me with a more stable base.

Any pose can be modified to make it more accessible for you. In fact, when I teach certain poses, I sometimes reel off about four different versions of the pose so folks can experience its benefits—wherever they’re at in their practice.

Again, I couldn’t possibly list out all the yoga modifications that exist in one post. They’re infinite. But if you’re interested in learning more, I highly recommend the work of Dianne Bondy, a social justice activist, an accessible yoga teacher, and leader of the Yoga for All movement. Bondy offers tons of workshops, but she also has two books. Check out Yoga Where You Are, which she co-authored with Kat Heagberg, and Yoga for Everyone, in which she takes 50 classic yoga poses and shows how to best adapt them for you.

I like to tell students to listen to their body more than they listen to me. After all, they’re the experts of their bodies and of how it’s feeling in any given moment.

Of course, when so many of us come to yoga feeling disconnected from our bodies, it can be difficult to parse out what this advice really means.

Yoga instructor Aisha Nash, the creator of Anti-Diet Yoga, has written about this conundrum on her Patreon page, where she shares resources on accessibility and self-acceptance. In one post, she points out that most of us are not used to paying attention to our body’s cues… until we experience pain.

She writes, “with neurodivergency comes a lack of interoception. As in your brain can not understand the cues from your body.”

For me, listening or paying attention to the body is an act of noticing: How does a pose feel? What are the feelings I’m feeling, and where am I feeling them? Am I experiencing pain? Discomfort? Where in the body do these feelings of discomfort exist? What might be eliciting the discomfort?

Instead of playing the comparison game – trying to make your body look like those around you – try to push yourself deeper into a pose. Use this practice of noticing in order to figure out how a pose might better serve you.

And remember: A pose doesn’t have to be a part of your practice if it’s not serving you.